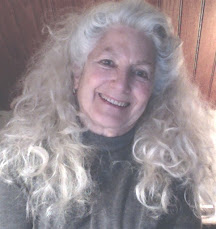 It's always fun to have J. Arlene Culiner on Discover... Her Fearless Friday post is no exception. So grab a cup of whatever, sit back, and enjoy the read!

I live in an area of France where ancient sunken paths lead between villages or isolated farmhouses. Many of these dirt lanes, hidden behind high hedges, are pre-Roman, and when I walk along them, I think of long-forgotten peoples — Diablintes Aulerques or Abrincates — who wandered here two or three thousand years ago.
Less than a hundred years ago, these ways were still used by itinerant preachers, postmen, workers, shepherds, and cowherds who needed to get from one farm to another, one village to the next. Needless to say, I rarely meet another soul when I’m walking along these damp, shady, secretive lanes, and it’s easy to see why superstition held on longer in this region, why there are still village sorcerers, casters of spells, and a belief in supernatural beings.
Some years ago, I temporarily moved to an old house along a local river, and I particularly enjoyed walking along the old towpath that headed into a small forest before continuing on to the closest town. And one late spring evening, there I was, stuck in that town with my huge black dog named Dog, and with no way of getting home. Yes, I could have waited for a ride, but that would have meant killing off two or three hours. Wouldn’t it be more fun to walk? My house wasn’t far, only around five miles…or so I thought, for I had never gone the entire way on foot. I was quite wrong: it was almost twice that distance. I also hadn’t reckoned on darkness.
I had covered quite a bit of ground when night fell, and I couldn’t find the path leading toward the wood. 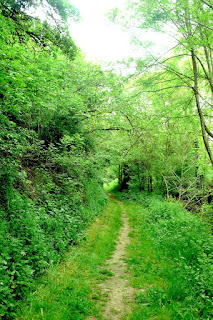 For the next hour or two, I stumbled over tree roots, headed down sunken lanes at random, and I always ended up in marshy fields or impenetrable thickets. Dog was of great help, finding a way through hedges, leading me to dry ground, but he couldn’t tell me which path was the right one. I wasn’t frightened — I didn’t have time for that — but I was unhappily resigned to the idea of wandering until dawn or sleeping curled up against a tree. The night grew colder: my long black coat and black scarf were warm, but not warm enough.
Finally, exhausted by my thrashing about, I was relieved to see a light far ahead. A feeble light, yes, but light meant electricity and civilization, didn’t it? And, sure enough, Dog and I soon found ourselves in a farmyard surrounded by barns and a low stone house.
I went up to the door, knocked. I heard voices inside the house, but no one answered. I knocked again. Then again. I couldn’t leave without getting directions.
Finally, a window was opened, and a heavy wooden shutter was thrown back. A woman appeared, and she began screaming: “Go away! Go away, go away, go away!”
“All I want are directions to the river…”
“Go away!”
“I’m lost. I need directions.”
Behind her, a man materialized. He was holding a rifle. “Get away from here.”
I did, of course. Sticking around was unhealthy. But what odd people they were. Just my luck to find the strangest people in the area. I stayed lost for quite a while, then miraculously found a path to the river. After another hour or two, I was home.
A few days later, when sitting with a group of local people, I told them about my experience.
“Of course they told you to go away,” said one man. “They were scared silly.”
“Of what? Me? A lone woman with a dog.”
“Yes, you. There you were, wearing that long black coat and walking with a black dog. They thought you were a houbie.”
“What in heaven’s name is a houbie?”
“An evil spirit in a black cloak who wanders through the countryside, brings back luck, and casts the evil eye. Local belief says that if a houbie asks a question and you answer, you’ll soon die. That’s why they wouldn’t give you directions. You’re lucky they didn’t shoot you.”
“Many years ago, my father’s sheep were being stolen by a houbie,” said another man. “Everyone said there was nothing he could do, but my father wasn’t superstitious, so he took his gun, hid out in his field, and waited. One night, he saw a figure in a black cloak creep out of a hedge and head for the sheep. My father stood up, cocked his rifle and got ready to shoot. The houbie saw him, turned, and ran off leaving his black cloak behind. But my father had seen that the so-called houbie was his next-door neighbor.”
I can’t put my experience down to fearlessness. I was only being foolhardy…as usual. But I do love writing about fearless heroines. Like me, they always get themselves into tricky situations, or find themselves in dangerous parts of the world, or they take chances, or they risk falling in love with impossible people. But no matter what happens, they’re always fun to read about.

Author Interview by D.V. Stone: Around The Fire Welcomes Back J. Arlene Culiner. Whether I'm sitting around the campfire, the firepit, or my fireplace the best thing is being with interesting... 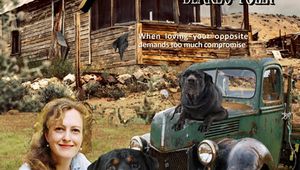 Featured Interview With J. Arlene Culiner Tell us a little about yourself. Where were you raised? Where do you...